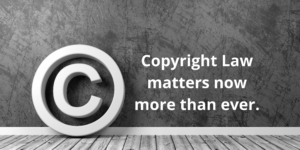 Why the Resurgence of Relevancy?

Digital content is being shared ALL the time. This transience of information has led to an influx of content being created and shared across all mediums. Once placed into the public domain, as easy as it may seem for us to disseminate an original work, it is even easier for someone to imitate it. This has sparked a new and revitalized relevance for copyright law and understanding how digital mediums have made it more difficult for us to determine who owns what. All of this leads us to believe that, in 2021 and moving forward, copyright could potentially be one of the biggest areas of law for a generation born on the internet.

For many companies, copyright suits can easily involve millions of dollars, simply because the stakes are tied to the company’s branding or the product created.

Additionally, because we are in a new digital era, future copyright cases can set brand new precedence, which may alter the protections that copyright owners have enjoyed for so long. The ability to transform original works, either through parody or criticism, has created an influx of cases that require a factorial evaluation to be conducted by the courts. Was the work transformative enough to make it unique?

Such factors include i) the purpose and character of the use, which includes whether the use is of a commercial nature or is for nonprofit educational purposes; ii) the nature of the copyrighted work, iii) the amount and quality of the work that has been copied; and iv) the harm brought by the transformed work.

For the small-time influencer, this could mean the difference between a few paychecks, but for companies, this can be a determining factor in their ultimate success. To explore how copyright law is being used today, we wanted to break down three cases that could be influential in 2021.

Three Examples of Cases on the Block

This is a case involving the application of copyright protection to software owned by Oracle and resolves the question regarding whether Google’s use in creating an android operating system that is comprised of Java coding constitutes fair use. In January of 2019, Oracle initiated a case against Google, alleging improper use of 11,000 lines of Code from JAVA SE, which was found not to be covered under fair use by The U.S. Court of Appeals for the Federal Circuit. This case has made it all the way up to the United States Supreme Court, who heard oral arguments on the issue Wednesday Oct 7, 2020, and has yet to reach a decision on the matter.

The main challenge that lies ahead is in determining whether the specific code used by Google within the Android interface is considered to be an algorithm, formatting, functions, logic or system design, which then would not be covered under copyright law, as they are not considered a means of creative expression. Digital coding, although used widely, can become the subject of stringent copyright criticism. As we move into a more digital frontier, it becomes important to understand if the coding you are using can be fairly used.

Music has generated a multitude of copyright cases as different platforms have been developed and used for streaming purposes. To place this into context, take the case National Music Publishers Association v. Peloton. In this matter, a $370 million lawsuit, which more than doubled the original $150 million lawsuit, was filed by the National Music Publishers Association last March, when it was alleged that Peloton used over 1,000 musical composition without obtaining the proper licenses to use them. A settlement was reached where the creators for the songs were properly compensated for the use of their music included in the Peloton experience. Peloton took the initiative to remove the NMPA protected songs for all workout videos provided to the public.

This third case involves our beloved Dr. Suess and a claim brought by his estate against the publisher for a work that mashed up “Oh, the Places You’ll Go!,” and other Dr. Suess works, alongside Star Trek imagery as well as characters from the original fictional franchise. The United States District Court for the Southern District of California found that the comic book’s use of the material was fair use and was treated as parody rather than a complete infringement on the original. This “highly transformative work” allowed for well-known characters to interact in a way that was not so different from their original works.

This being said, it doesn’t always happen that way. The opposite actually occurred in Dr. Seuss Enterprises, L.P. v. Penguin Books USA, Inc., 109 F.3d 1394 (9th Cir. 1997), whereby an author used the characters created by Dr. Seuss to retell the story of the O.J. Simpson murder trial. The appellate court determined that the author’s use of such characters in this work created a satirical piece, not a parody. As such, it was not transformative enough to be protected from a copyright claim.

Our Take on the Matter

These cases bring to light how important certain words are when reflected in new, legal light. Gaining clarity on terms like parody and fair use is vital for navigating in a way that avoids legal pitfalls.

Miriam-Webster defines parody as “a literary or musical work in which the style of an author or work is closely imitated for comic effect or in ridicule.” Parody is important to establish, so that some measurable line of difference exists between your work and the work you have utilized.

What is fair use?

Fair use is a doctrine allowing for the use of copyrighted work for transformative purposes, such as for criticism, parody, comment, news reporting, teaching, scholarship and research. Fair use is becoming a common practice, especially given the rise in reaction content – videos and posts that are offering their opinion on a certain song, movie, or work of art.

Copyrighting is crucial to the protection of your works, no matter the medium.  If you’re creating digital content online, having an understanding of copyrights will help you be confident in your creations. You can rest easy knowing that your work remains original. Not only this, when establishing a business, you need to take into consideration how unique your endeavor is.

What This Means for the Future

With technological changes, come changes to the law. Copyright laws will have to alter and grow to accommodate a market that has become highly digitized, paving the way for possible fair use claims in years to come. As a company or brand’s content gets used by the public, they will have to determine if it is worth litigation or not, especially if it grants them popularity and added visibility. One thing we can be certain of: copyrights have never mattered more than they do right now. That is why hiring a lawyer can offer you armor. It can be the difference in how protected your content, business, or brand remains.

Want to know the difference between trademarks and copyrights?

We’ve got a blog that talks about exactly that.

The Current State of Foreclosures, Evictions, and Real Estate
Scroll to top