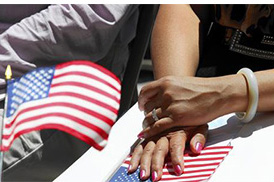 In order to be naturalized, an applicant must first be qualified to apply for citizenship. Then, he or she must complete an application, attend an interview, and pass an English and a civics test. Upon successful completion of these steps, the applicant takes an oath of loyalty, and becomes a citizen. These legal requirements help the immigration service ensure that only those people who are sincere in their desire to become Americans become naturalized.

The U.S. Citizenship and Immigration Services (USCIS) states that applicants for naturalization must be:

The residency requirement has some exceptions for time outside the country that your attorney can explain in detail.

The naturalization process can take an average of six months from the time you apply. To ensure that your application is not returned to you before it is fully evaluated, be sure all of the information requested is included with you application. You will also need current photographs taken, have your fingerprints taken, be interviewed and take the Oath of Allegiance.

As a naturalized citizen you are given certain privileges, such as the rights to:

Successfully naturalizing in the United States requires a thorough understanding of the steps involved, and careful preparation at each stage. If you or a loved one are considering becoming a U.S. citizen through naturalization, you should contact an experienced immigration attorney.

How to Be a Good Client
Scroll to top