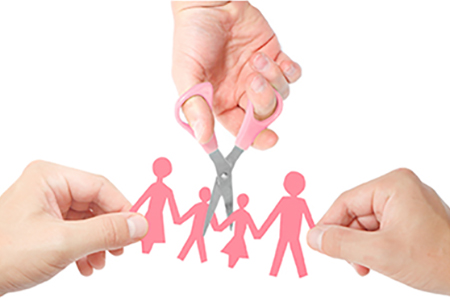 Divorce is not the most fun thing in the world.  There’s usually hurt and sometimes anger, which is to be expected.  The divorce process can either go easily with mutual respect, or it can create bitter feelings and hurt everyone who is involved. Divorce does not have to be, nor should it be a destructive process.   If it is, you can alienate the children.

During a divorce that involves child custody disputes, one or both parents can attempt to distance the child from the other parent. It can be a indirect attempt by a parent, such as making subtle negative comments about the other parent in front of the child. One parent will often criticize the other parent, trying to instill anger and extinguish the child’s bond with the other parent.

At times, one parent will inform the child about the divorce process and the struggle between both parents. One may roll her eyes at something the other parent said, or blame the other for not trying to make the marriage work. Children should not have to deal with these adult emotional topics or ever be forced to pick sides.   When parents invoke these emotions of resentment toward the other parent, it can have lasting effects on a child. The child may develop separation anxiety or use the same techniques for dealing with relationships as an adult.

Signs of Parental Alienation Syndrome
Not all children show the same signs of parent alienation; however, many children do develop some type of resentment, hostility or desire to stay away from the other parent. A young child may cling to one parent and avoid the other parent. An older child may develop sleep disorders or have anger issues.
Other signs of alienation syndrome include:

Though parental alienation syndrome does occur in some divorce cases, there’s a difference between a child feeling alienated from a parent and preferring to live with the other parent. Some children may feel closer to one parent because of similar interests or because that parent is the primary care provider in the home. Though children may have a parental preference, they still want to spend some time with the other parent.

Parental conflict takes its toll on the child, resulting in the child choosing one parent over the other just to end the conflict. When children are caught in the middle between conflicting parents, they may align with one to remove themselves from the situation, even if they have no problems with either parent. An alienated child aligns with a parent because of deliberate parental involvement.
Children sometimes suffer the most during the divorce, but parents can decrease their children’s anxiety and make the process easier for them. The children are losing a unified home and must deal with the stresses that come with having divorced parents. Understand the signs of parental alienation, and keep the children’s best interests in mind to avoid any further hurt that comes with the divorce.

Securing a Corporate Partnership for a Nonprofit