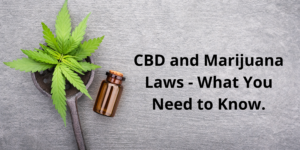 We have a saying here at OLG. “Some laws stay the same, and others are always changing.” For Businesses and Consumers alike the world of CBD and Marijuana Laws are evolving within States and Federally. As of March 2019, a bill was passed that allowed smokable medical marijuana to be sold in state-certified medical marijuana treatment centers to patients with a medical marijuana card. Additionally, as of January 2020, the sale of CBD and Hemp products for consumption or application containing less than 0.3% delta-9-tetrahydrocannabinol (THC) concentration became legal for anyone over the age of 18 and to be sold without a medical marijuana dispensary license.

Marijuana at the Federal Level

Early in December of 2020, the House of Representatives passed the MORE (Marijuana Reinvestment and Expungement) Act. While this act is unlikely to pass in the Senate, the movement towards federal acceptance of marijuana use and sales continues to trend upwards; however, ultimately it should be noted that on a Federal Level, marijuana remains illegal as a schedule 1 drug for high potential for abuse and little to no medical benefit. In 2018, under the Trump Administration, the Department of Justice announced that Federal Prosecutors can pursue criminal cases wherever state and federal marijuana laws conflict. However, this policy has largely been symbolic thus far. Law enforcement officers make a majority of their marijuana arrests under state, not federal law.

CBD and Hemp in Florida

In 2018 the Farm Bill was signed into law bringing sweeping changes to how we grow and consume CBD and Hemp products. The Farm Bill created a process that helped state and tribal governments establish Hemp Programs in which individuals could legally cultivate hemp. CBD and Hemp are legal to both cultivate and consume in the state of Florida for anyone over the age of 18 so long as the product contains less than 0.3% THC content. While no licensing is required to consume hemp products in Florida, licensing is required for those who wish to be grow and/or sell hemp products.

To sell CBD/Hemp in an ingestible manner, whether prepackaged or not you must have a food establishment permit. Additionally, there is further licensing requirements if your products have dairy or frozen components. Topical CBD application is considered a cosmetic and so long as you are selling the topical in or into Florida in its original packaging no license is required to sell. To grow and cultivate Hemp plants, you must not only apply for a license, you must also include fingerprints, environmental containment plans, transportation plans, and follow specific hemp cultivation site statutes, among many other requirements.

What Does Having a Medical Marijuana License Prevent?

If you’re looking to get a CWFL (Concealed Weapons and Firearms License), there may be some conflicting elements. Florida’s Agricultural Commissioner, Nikki Fried recently addressed the subject on the podcast The Marijuana Solution. Her logic is that, due to many alcoholics and those addicted to prescription drugs owning guns, medical marijuana license holders should be able to as well, but from a legal perspective, this may not be as solid as one might assume. On top of stating that the Department of Agriculture would, “not be taking anyone’s concealed weapons permit, or refusing to issue a CWFL,” Nikki also publicly announced that she herself has both licenses. The incongruency lies in the fact that marijuana is still considered an illegal substance according to Federal Law, and that conflicts with those in possession being able to legally own a gun. Fried did mention that she plans to lobby congress about the issue, but truly only time will tell how the Federal Government plans to treat marijuana as a substance.

We recommend trepidation at every stride, and an innate understanding of your rights. Due to the fact that these laws are changing over time, it’s important that you speak with a lawyer immediately when you have questions. We’re here to help, and will make sure to keep you updated with the laws as they evolve, which we guarantee they will. If you’re ever seeking answers, make sure to contact an experienced attorney for your needs today.

What You Need For Probate – The Process of Proving a Will